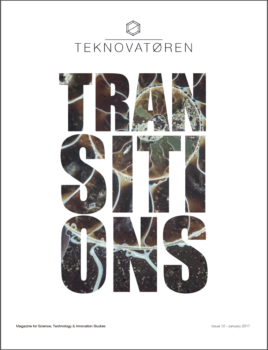 A CHANGE OF SCENERY

In this 12th issue of Teknovatøren, we explore transitions.
Transitions can be painfully obvious, or hardly noticeable. They can be swift or they can be slow. What we find interesting about them are the processes of change where people explore something unknown, be it large or small. It happens in a context which is rarely crystal clear. The scene is set, but the coming act is still a mystery.

We are all part of and contribute every day to transitions in the many small decisions that we make. The consequences of our choices are often unintended and rarely predictable. An hour after this issue of Teknovatøren is due to be released, Donald J. Trump will be sworn in as the 45th president of the United States. For many, this represents a major shift in politics. Trump´s election has for many been a surprise, and perhaps calls for a hard look at the so called “post-factual” society in which we find ourselves. Politics is increasingly based on stirring the emotions of public opinion where facts come second. This tendency can also be witnessed in Europe, with the British people’s decision to leave the EU as the most dramatic of examples, and traditional (mainly leftist) parties lose ground to right wing populists.

Not many had foreseen this, and there clearly exists a greater public dissatisfaction than many are aware of. With this change in politics, it is likely that the years ahead will continue to be dramatic. Public debate will get tougher, and less predictable. This is a transition in which we jump head first into something completely unknown.

While we are in the midst of an established political spectrum in transition, it is not the only sphere undergoing a major transition. The climate, the economy, populations and globalisation are also changing and evolving significantly. How can we influence these transitions? Is drastic change inevitable? While this issue is not particularly oriented towards politics as a whole, it shares a common line of thought with the example presented in this editorial. This issue hopefully gives opportunity for thought and reflection, as one should not go gently into the unknown ahead. Rather, one could learn from past instances, and contemplate. We hope that you will find this issue of Teknovatøren interesting.

Teknovatøren is a semi-Scientific Magazine published by the master students at TIK Centre for Technology, Innovation and Culture, University of Oslo. Teknovatøren seeks to illuminate issues on technological Development, innovation and knowledge production.