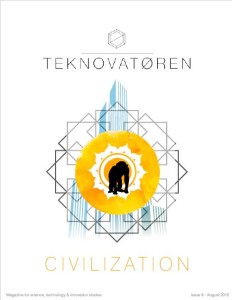 This issue of Teknovatøren has chosen as its point of departure, the fantastcally broad term civilizaton. In relaton to the previous issue where we looked to the future based on current trends and developments, this issue has taken a diferent approach, centering on historical developments in the hope of understanding what we have come to associate with a civilizaton. We could not have hoped to achieve this without touching upon on some of the traditional themes of this publication, and as such, we are proudly writing ourselves into a civilization of previous issues of Teknovatøren, to which we owe great debt. For what is a civilization if not an entity of which its members is work – ing together in community, not always with one single common interest, but always with the common interest of progress as its driving force?

Every civilization has its challenges and battles to overcome. Present inhabitants of planet earth will perhaps have noticed the challenges of dealing with the climatic problems we humans have created. These issues highlight the global nature of modern civilization: technologies are bringing previously distant inhabitants together in dealing with common problems. As with our technologies, civilization is continually expanding its boundaries, even to the far away corners of our galaxy. Technology, as such, sets the limit for civilization’s extent. It allows us not only to move through time and space, but also to access our own creations in making new worlds and communities online. Our technological artefacts are increasingly integral parts of our daily lives, a fact that may cause many different reactions. It might even challenge our own conception of ourselves as human beings, and question the values with which we associate ourselves, and with our surroundings.

Privacy, efficiency, sustainability, history, energy, government, infrastructure and inhabitants: these are but a selected few of the core elements of any discussion on a civilization, upon which we measure technological development. Civilizaton is a mean for survival, a defense mechanism against both internal and external threats. As such, civilizations are always struggling to survive, legitimizing their existence through its technologies of governing technologies, science and citizens. If we move to close to the sun we might get burned, but if we stay grounded for too long we might be drowned by the rising sea. The power of monitoring and controlling technological development is as challenging as it is essential for the existence of civilization, as we know it.

Choosing a term like civilization as the topic for an interdisciplinary semi-scientific exploration of human (and non-human) technological construction is not the easiest task in the world. We could of course have taken an easier route, limitng ourselves to one specifc civilizaton, the present state of our increasingly global civilizaton, or making a fcttous civilizaton out of current technological developments. We did neither of these things. We could even have limited ourselves to the human race. We did not. Instead we chose the difficult route, where the ins and outs, the past, present, and the possible future of this, our strange corner of humanly measured eternity, is depicted through the technologies that enable us to discuss this very term; civilization.

This is our civilization, and in drawing its boundaries we have attempted to show the diverse, yet strangely connected elements of which it is made. From the earliest stages of technological development to the possibilites of interplan – etary expansion, and some of the lines in between, we have mapped out our territory. Now we invite you to take a journey through it, using one of the oldest technologies we have: writng. Welcome to the civilizaton Teknovatøren!