The young interior architects of the design collective Makers’Hub are creating tangible projects to improve the living conditions in Norwegian refugee centres. In the process, they are not only trying to open the eyes of the refugee centre industry to the value of housing quality, but also to change how Norwegian architects look at their own profession.

I sat down with two of Makers’Hub’s founders, Else Abrahamsen and Ida B. Wold in their offices at Bislett. With bright surfaces mixed with wooden textures and clean lines, the architecture office is a stark contrast to the kinds of spaces the two interior architects work with in refugee centres.

«Interior architecture is an industry which traditionally focuses on making sort of posh, aesthetically pleasing rooms,» Else  explains. «We’re taking the work outside of the office. We want to be hands-on, and everything we do should involve the residents». For the last year, the Makers’Hub team has been working at the Torshov refugee centre, where they have completed a number of projects to improve the living conditions of its residents. «The entire asylum seeking process robs people of their identity – they feel like they are losing themselves,» Else says. She speaks passionately and confidently, displaying the demeanour of someone who has had a lot of experience pitching her project mission.

The initiative was inspired by research on Norwegian refugee centres coming out of NTNU since 2012, which reports on widespread poor housing quality. Maker’sHub’s projects use a method of participatory architecture, in which refugee centre residents are involved in redesigning and redecorating their living spaces. This method was pioneered by Susanne Hoffmann, and her Berlin-based practice Die Baupiloten. According to her, users’ experiences are invaluable in the design process. 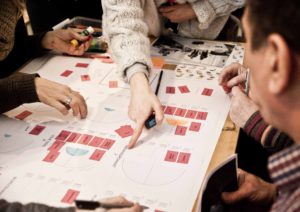 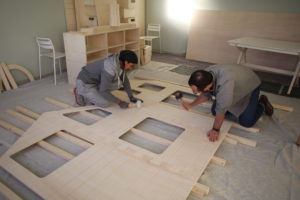 «We are trying to make the institution feel more like a home», says Ida. «Though it is a temporary home, it’s about belonging to the place, by tying themselves to it, by making something of their own». Makers’Hub also finds it important that their designs reflect the diverse cultural backgrounds of refugee centre residents. «The people who live at the refugee centres have a different culture from ours; they connect with different things than we do.»

So far, the team has done their work on a voluntary basis, but they are now looking to make the organisation their main source of income. Having started their work with the non-profit organisation Norsk Folkehjelp, they are now in contact with commercial refugee centre operators. «Slowly the refugee centre industry is starting to understand why housing quality is important, and what it can do for the residents,» Else says. But the current institutional structure poses some challenges. «We think the refugee centre model right now is really inefficient. You open and close centres all over the place, and you never go for continuity. Every contract is reopened for negotiation every three years, which makes it really difficult to achieve continuity for anyone, and this is a major reason why they don’t invest in housing quality.»

Else Abrahamsen has spent the last year promoting their ideas to policy makers at debates and conferences. Their projects from Torshov have been invaluable in getting attention to their ideas. «We have these tangible things that we have made. We need stuff to put on display», Else says. «And that’s when people started contacting us, because we are the only ones working in this field right now.» 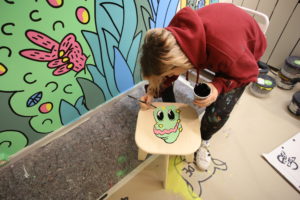 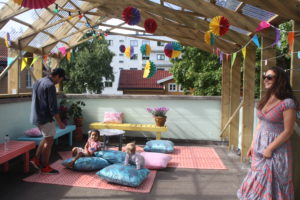 The founders of Makers’Hub also hope that their work can set an example for others in the architecture industry to volunteer their skills and knowledge for not-for-profit projects. «Getting in the door with refugee centres is a difficult process,»  Else says. One of the first things Makers’Hub did at Torshov was to invite interior architects in to map out  the space at the refugee centre. They have also been reaching out to major players in the architecture and interior architecture industry by going to conferences, holding talks, and even setting up a temporary ‘People’s Kitchen’ at the Norwegian Centre for Design and Architecture (DogA) with volunteers from the Torshov refugee centre.

Through their project at Torshov, Else and her co-workers have learned a lot about the relationships you have to navigate between actors such as the Norwegian Directorate of Immigration, the landowners of the buildings and the refugee centre operators.  As they decide where to take the organisation in the future, this will perhaps be the most important knowledge base they can leverage. «We want to be an umbrella organisation that can help people get contacts,» Ida says. «We want to link more actors together and create connections.»

The three young innovators are leading the way for socially conscious design, showing other architects by example what is possible. And through their hands-on approach and tangible results, they may open up the eyes of the larger institutions and commercial actors to the value of refugee centre housing quality, and show how architects can contribute to improving the day-to-day existence of refugees.

This article was first published in the January 2017 edition of Teknovatøren.