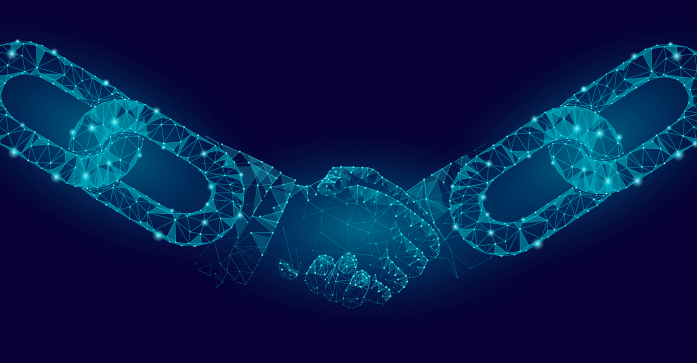 In 2019 the blockchain-technology will celebrate its first 10 years. And with this we have experienced a decade with great expectations, fears and confusions, as it may be the groundbreaker for a new technological revolution. It was first introduced by Satoshi Nakamoto as cryptocurrency “Bitcoin” in 2009. When launched some may have thought this was “just another tech mayfly”, but as we have learned through the last decade – Bitcoin and blockchain are here to stay. So, what is it all about? And how is it possible to conquer a reluctant tech world with algorithm and promises of a more secure and efficient trading system?

Recently there has been enormous interest in blockchain and blockchain crypto currency like bitcoin and private ICOs. To explain it the easiest way -Blockchain is data connected to multiple ledgers instead of on single ledger as today. The technology enables safe and efficient trade because it is impossible to break the chain due to the multiple ledgers. It is scalable and efficient because it is possible to connect to from anywhere if you have a pc and internet. All transactions are trackable. As history shows, some might be sceptic to new technologies that are difficult to understand and may reject it. This is often the case for innovation: at first it is easier to reject it than to adopt it. However, winning technology will always prevail.

All hype around the blockchain seems to be over and the market shows to be more trustworthy than a year ago. As an example, so far in 2018 21,5 billion USD have been distributed to private companies by ICOs (which is a blockchain secure financial instrument) in line with shares in a company, collected through ICO tokens based on blockchain technology in private companies. It comes clearer and clearer that blockchain technology is going to be accepted by the marked, as that a lot of serious businesses as well as public services will embrace the phenomenon.

Blockchain is also useful for tracing and tracking transactions by GPS or sensor technology reporting to the chain (IoT). The Danish firm Maersk has recently piloted an insurance system for their shipping industry which enables the insurer to monitor risks on daily basis and make immediate payments to Maersk in cases of any incident. The other examples are Australian and Swedish governments. The Australian government is planning an official granted crypto currency for customs purposes, and the swedish government has started working on introducing the national crypto into E-krona.

So no doubt – blockchain has significant benefits in transactions, from the members of the chain who can predetermine a certain output if a certain input is proved to the chain, often referred to as “smart contracts”. Let me set an example, for real estate transactions the buyer`s certificate may hence be issued simultaneously as the buyer pays the purchase price with a BankID. At the same time, the real estate archive will receive the notification of the transaction and will be able to notify it in the official registers.Moreover, insurance companies will have access to real needs as they will be able to provide low prices when your car is in the garage, while higher premiums when travelling on dark and icy roads.

It becomes more and more important for good lawyers to participate in the actual coding and protocols governing blockchain as the technology itself may be able to determine legal frameworks automatically, and because investing or participating in blockchains requires a certain amount of trust. Trust in algorithms, trust in revenue distribution that is granted, and trust in all the legal rights that the blockchain has granted them. Lawyers have already begun to draft and work with quality guidelines as they check all of White Papers, privacy rights and enforcement issues.

Perhaps the legal system will be running by blockchain in the future. Perhaps witnesses and parties, judges, media press, police and custody will be members of the same legal blockchain system. Not now, not tomorrow but after some years? For all blockchains, it will be a great amount of data running through. For the legal systems, this may be underpinned by machine learning with easier prediction of results, legal fees, liabilities and responsibility. In the end, blockchain technology will approach and even reflect the same ideals and values as the traditional way of handling law. Perhaps blockchain is nothing new under the sun – only a more efficient way to track, trace and accomplish transactions than we are used to. In any case, it may help to grant more justice, more democracy and more transparency for the best of all mankind.