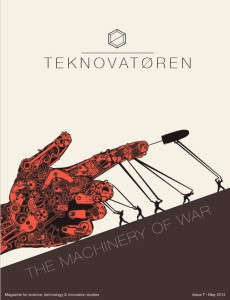 The Machinery of War

There is nothing more timeless nor universal than the act of war. From the era of flintlocks and cannons to the days of missiles and killer robots – people have always fought each other. Waging of war has continuously relied on the technological equipment at hand. Serving as groundbreaking accelerators propelling social change and technological advance, arms races has consti- tuted essential driving forces thrusting forth modern progress. The destruc- tive power of nuclear, chemical and biological weaponry has simultaneously changed the very nature of modern warfare. While still struggling with the dis- posing of Cold War nuclear waste, are we ready to face yet another change of scenery; the war going digital and smart?

In this issue of Teknovatøren we twist the Rubik’s cube of warcraft, accentu- ating some of the multiple facets, shades and shapes it takes on. From the smoggy battlefield of air-polluted China to the fragmented scape of cyber warfare, we dive into the universe of combat and cavalry, doom and destruc- tion. By encountering the innovative and technological aspects of war, we address how the interplay between man and machine is shaped through and by human conflict.

Every art of creation is first an act of destruction. The machinery of war slams together violence and productivity – forcing work and waste into a relationship of near seamless contiguity. Technological advance poses alluring opportu- nities as well as dangerous potentials for demolition. The problem occurs when we are not capable to discern progressive potential from destructive power. Information has now, more than ever, become a potent weapon in the technological warfare. WikiLeaks, Heartbleed and Edward Snowden are examples illustrating that information technology devices are vulnerable ma- chineries that can easily be made subject to manipulation and exploitation – and virtually start leaking. The spreading of confidential information drove Snowden into a lawless limbo last year. This year he is nominated for the No- bel Peace Prize. Hero or traitor? The machinery of war may say to warp our conceptualizations of right and wrong.

Through the TIK Master program we are repeatedly being admonished that technological artifacts seldom evolve in a vacuum. Neither does the war ma- chine. Acknowledging the human role and responsibility in steering techno- logical progress requires constant awareness of the flaws and frailty the ma- chine represent. Staying alert to the pitfalls of production can thus guide us to better distinguish between what constitute creative destruction and what may lead to destructive creation. After all – we are all participants in the technological World of Warcraft. We better start considering how to make the next move.